What I Did for Food 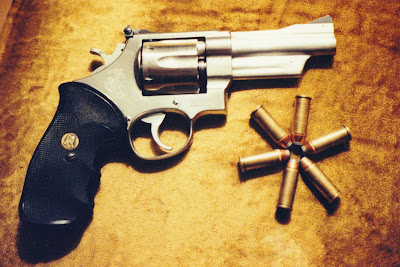 S&W Model 624, Stainless .44 Special
A couple of them are shown twice here. Many are not shown at all. I just felt like illustrating to anyone who might care why I felt so sorry for myself when I lost my job and we moved to Boise and I sold all my guns to help keep us in groceries.
I think there was an old song called What I did for Love. I suppose we could all write our own versions of that one. But what I did for food actually hurt me and made me proud at the same time. I've been acquainted with some men who would not have done this. But how could they not? Nothing beats our obligation to do what we can to take care of our families. I suspect there are some who think I'm failing in that obligation right now. Shrug. They might be right. But on one occasion in my life, when it mattered, I did the right thing. It had taken me about thirty years to collect them all and I had sacrificed other things sometimes to get them. But I sold them off in ones and twos until they were all gone.
No, it's not that big a sacrifice. I didn't have to give up my freedom or get shot at or brave a cholera infested slum to get the food for us. Sheryl was doing more than her share, too. But these photos represent just a few of the things that I lost when I lost my job. I also lost a lot of self-respect and confidence. But you can't show those things in photographs.
Just so he knows I haven't sold his stuff, there are one or two of Joseph's things in these old photographs. They didn't go out with the rest. And Grandpa Hartsell's old 16 gauge side-by-side was never abandoned. But these pictures probably represent about one third of what I lost. Some will sympathize with that. Thank you. Others will say, "Why does a person need all those nasty old guns anyway?" I doubt I'll ever be able to communicate a satisfactory answer to that most unsatisfactory question. If the beauty, the grandeur, and the History represented by such things doesn't jump right out at you, there's probably little I could say to engender that kind of aesthetic sense in your heart.
But I haven't given up hope. I'll probably never have as many, but I have four good ones now. And I have hope that the number will grow at least a little by the time I leave them to younger folks to enjoy.
Ruger Mark II, .22 target pistol, 10" bull barrel. 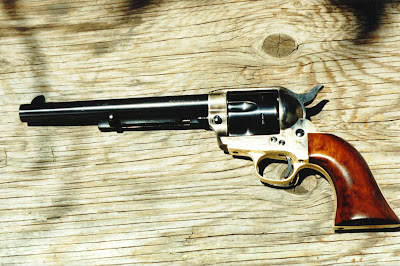 Italian clone for CVA of Colt 1862 Pocket Police which was issued to Union military police during the Civil War.

You're right Jim, I don't understand your or anyones love of guns, but I do understand and respect the sacrifice you made. I don't really have any material items that anyone would give me cash for, but I have things that would be hard to part with. You did the right thing, that had to be done at the time, and I hope you can keep adding to your collection. Love you J5

Hi Dad. That was really sad to see. It helped me appreciate the loss more though. Is it possible for you to go back and edit this to add the names/types/models of each firearm? Also the years they were made, etc.? There were several that I liked and thought to comment on, but i don't know how to when I don't know what they are (if that makes any sense outside my little noggin').

Either way, I understand the loss and am sorry for it. I love you, Dad.

The Only Mister Ed said...

I stumbled on your blog by hitting "Next Blog" on the banner. I too know what it means to sacrifice material things for the good of my family. I had an extensive record collection that had taken me many years to build, many hours of searching, deals with other collectors, rummaging through thrift store bins and garage sales. But one day I knew we needed the money for food far more than I needed several hundred vinyl disks. Doing the right thing is not always easy but it can be the most fulfilling thing you will ever do. With that kind of courage you absolutely can rise up again. Good luck!

Thanks for going back and adding the details for me, Dad. It was your Italian clone for CVA of Colt 1862, that I thought was particularly lovely in its lines. I also liked your 1853 Enfield, your cool Ruger MkII and your Colt single-action Army, .44 Special. The wood grains on several of the rifles was stunning (think Ruger All Weather. 22 and your old 20 gauge. Gorgeous!), but then as a former "wood-be"violinist, the wood grain "wood" matter most to me, eh? :)Okay, Okay, I'll stop. :)