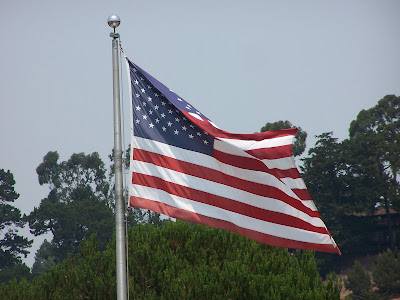 Only a teacher of long standing (and lots of running around the classroom) would dare to issue a report card to a brand new president. This is really just a review of Mr. Obama's performance so far as a president-elect and of his performance and the performance of a few others on the day of his inauguration.

There's a great deal of positive comment to be made here. The man is an able public speaker, certainly the best since Mr. Reagan. The speech was well thought out, well-phrased, well-spoken, and came across as being completely sincere. Indeed, I begin this administration giving him the benefit of the doubt in that regard. I believe he's sincere in his beliefs and intentions, although I disagree with some of them. I shall grade him here on many things, some of which really don't matter in the historical sense, at least not yet. For example, his elder daughter is a true beauty and seems to be well behaved. But if, as puberty rears its lovely and dangerous head in her young life, she turns into another Alice Roosevelt Longworth, well...

Presidential children can be blessings or liabilities to their parents. Willy Lincoln used to lead his friends on martial raids of cabinet meetings. Perhaps he knew something his father didn't about how much southern sympathy lay in the hearts of some in Washington. But then there are those moments no one is able to forget such as the salute popped quickly by John-John Kennedy to his father's flag-draped coffin. Sasha Obama gave her dad a thumbs up after his address today. What a little munchkin!

Well, here's the report card. You may feel that I've made mistakes in my grades. That's fine. You may certainly write in to that effect. Don't hold your breath about getting grades changed, however. You may even feel that I've left out whole categories of accomplishment or of behavior. Please write in about those, too. They might be very good ideas.

On the ball in organizing new administration post election. A

Limiting use of the Spoils System. B

Dignity when it is appropriate (such as at the inaugural ceremony.) A

Clarity in addressing the lengthy nature of the process before us. B+

Be brief. Be brilliant. Be gone. A

Civilized transition of power. A+

Sen. Feinstein's demeanor and performance. A

Thoroughly Baptist nature of invocation. A

Thoroughly Black nature of benediction A

Decision to dispense with the by-now traditional appearance of the MoTabs. B-

Marine One's transition to Executive One. A

New POTUS' dignified reaction to collapse of Teddy Kennedy. A

Sen. Harry Reid leading toast at luncheon with water. A

Appearance and courtesy of outgoing First Lady. A

Appearance and courtesy of incoming First Lady. A

Freedom from technical glitches. A

Not bad for a first day, Mr. President. Leave the Chicago-style politics behind you, enforce and protect the Constitution, keep your hands off my guns (present and future) and you might have a pretty good administration.

Get this! I think we agree! I did here, however, that several "groups" were invited from Utah, but only the Utes accepted. I have no I idea if the MoTabs were one of the groups or no.

I get a D- in civic awareness. I did not watch any of the festivities surrounding the coronation, nor did I tune in for the swearing-in. It just didn't seem that my watching would add to or detract from the proceedings.

Have to agree about Aretha's performance, but her hat made up for it, didn't it?! Ha! Great performance by that hat of hers. Almost a standing O...almost...