My solitary and lonely state has led me to look into an on-line dating service called eHarmony.com. My experience with this has lasted all of about 72 hours and will probably end soon. I cannot say that it has altogether cured my lonely feelings, but it has certainly given me some much needed laughs.


The first thing that seems so absurd about the experience is the type of question one is required to answer when registering with the service. For example, one question asks from which of four people, whose photographic portraits are shown, you would be willing to buy a car. None of them looked like a serial killer to me, so I gave them all the benefit of the doubt. I bought cars from all of them and am awaiting delivery as we speak. Sadly, I won't be able to afford gas for any of them.

My answers to the total of 24 questions led to me being labelled a "negotiator" personality. I was thrilled. Suddenly I felt empowered to talk a robber out of a bank without losing more than half the hostages. Of course, there was a little down side. It said that I might be kind of gullible, maybe even so much as to seek dating help from an on-line service. Ah, well...

One is asked to write a paragraph about oneself. The girls are all good at it, as if they had taken Senior English from Keats. "Look for me speeding down the beach on a bike with the wind fluffing my hair and the sand caking in my ears." Or something like that. Being incorrigibly honest, I couldn't bring myself to write anything. I mean, what could I say? "Sure, I'm bald and overweight, but I make up for it by being old and unemployed!"

One part of signing in is easy. Simple, factual questions are asked. Simple, factual answers are required. But a lot of the ladies seem to have forgotten that there were photographs accompanying the applications. A woman who lists her body type as having "a few extra pounds" leaps from her portrait looking like a refrigerator with arms. Big arms!

I had asked for a Mormon lady who definitely did not smoke or drink. A surprising number answered these questions with "I'll tell you later." When? It's not like we're ever going to meet in this life if you can't answer a straightforward question with a straightforward answer.

Then there were the ladies who could not get the answers lined up with the right columns: "Body type: No way." "Smoker? 5'4'' " "Faith: Casual drinker." Often the faith question would be answered with the words "spiritual but not religious." Huh?

And often those who wrote in "Christian/LDS" were dressed in an entirely non-LDS manner in virtually all their photos. Others would make the same claim but still say "Casual drinker" or answer the smoking question with "I'll tell you later."

Two ladies - a Catholic and a Protestant - came across as being particularly appealing and sincere. I almost emailed them. There were two reasons why I didn't. One is that it costs $19.99 to join this racket and I wouldn't feel right about spending that kind of money on anything but recompensing my loved ones these days. The other reason I couldn't consider these nice ladies is their religions. I've been married three times, all three of them in the temple. One of those marriages was perfect. That comes close to beating the national average, doesn't it?

In the years before computers, people kept their photos in large albums. If the photos were of the type to be shown off frequently, several of them were chosen to reside in the wallet. They might show off a big fish or a multi-pronged buck.

But when grandparenthood arrived, the wallet was adjusted to hold a much longer plastic piece with many more slots for holding pictures of grandchildren. It was always easy to spot two oldsters with strings of photos hanging almost to the floor, chatting away merrily without hearing much of what each other were saying.

These days, the blog, Facebook, and email have rendered such shameless bragging even easier. Allow me to demonstrate. 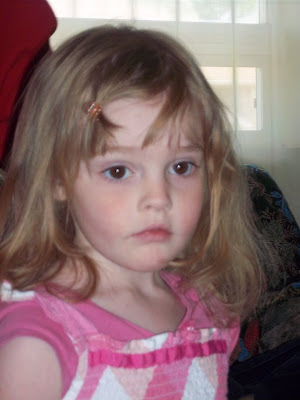 When I posted this picture I discovered that the computer put it above all the print and I had to roust out my poor, tired wife in order to garner enough expertise to drive the picture down to its present position. To spare her further interruption, I choose not to download (or is it upload?) any further pictures. Tonight. But a day will soon come when all the other moppets will be presented for your viewing pleasure. I have them from LA to Rexburg, even further if you count those into whom I've married. And they're all cute as buttons. I say so and we all know how humble I am. 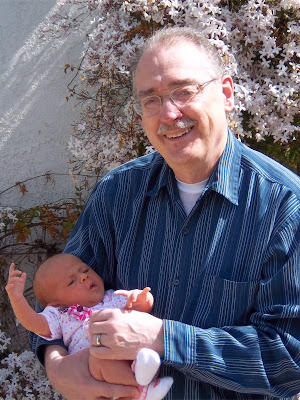 We are poorer than we've been for a very long time. Yet we live in relative prosperity. When I consider the Untouchables of India, the common peasants of Mexico, and those who wander the garbage heaps of the Philippines in search of food, I know that I'm in pretty good shape. In good enough shape to get out of shape.

As a newlywed I experienced difficult times for several years. Indeed, the only period of real prosperity I've ever experienced was from 1992 to 2004. Those dozen years were the time when I lived in ease. I couldn't buy a NEW car, but I could afford to keep an old one running. If I wanted a new book, CD, rifle, or pound of powder, I didn't have to wait long. Often, I could buy these things with what I had on hand.

Since losing my profession, I have learned to live small again. But I know how much worse off we could be. My country could be living under the thumb of the cartels as do our neighbors to the south. My health could be a lot worse. Our inelegant home could be even smaller and a lot more shabby. We could be hungry but never are. As a briefly alive character from the movie Shenandoah said to a youngster, "You're walkin' in tall cotton, boy!" And I am.

My children and grandchildren are all alive and well. I have recently been blessed with two new granddaughters. While I have three sons and a grandson whom I hardly ever see, I am comforted to know that they are well. I do not say that all is well in Zion. But I do say that much is right with us. We are blessed.