Setting the Record (or the Video Tape) Straight 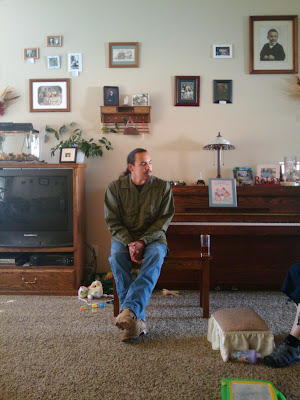 The only picture I could find with a TV in it.
Dearest children, students, friends, relatives, and anyone else who tolerates this blog:

I am not anti-TV. If I were, I'd be the world's worst hypocrite. I feel that I've left some of you with the impression that I'm against practically all TV programming. Well, I am against a lot of it. Whole categories of television programming these days leave me sort of cold and utterly unimpressed.

But there are some pretty decent and well-written things on the tube these days, as well. It's not up to you to follow my TV schedule nor is it up to me to influence yours. But, the First Amendment still being in place (for the moment,) allow me to talk about what I like and don't like on the tube.

REALITY TV: So called. It began with sticking a bunch of people on an island and exposing them to various "hardships" and "dangers." If there were really any danger, they'd be catching a ride out of there with the directors and the camera crew. And where's the reality in a group of
"stranded" folks just happening to be between the ages of 20 and 34 and generally fairly attractive. Why aren't us normal looking folks even represented on these shows? A couple of years ago I walked into the room and some family members were watching a lot of professional models (some of them male!) who were all sharing the same apartment! Oh, sure! THAT's gonna happen. And they teased each other and cried and ganged up on each other and encouraged each other, and occasionally tossed someone out on the street just because the rest of them didn't like that person! What's REAL about that? If he or she has a lease and the landlord doesn't want him/her out, guess what? They're stayin'!
Sheryl has been a fan for a couple of years of Dancing With the Stars. She started out just trying to support Marie, then laid off a season, but Donnie's on this year, so our TV is tuned to it again. She votes twice, once with her phone, once with mine. OK, I guess there's some reality there. Ozzie Osbourne's little girl really seems to have to work hard to learn the dances and the former Speaker of the House broke his foot - really! But does this qualify as "reality." I mean, if they weren't contacted a year in advance and if their agents hadn't accepted the 7 figure contract for them, not one of these stars would show up to work their guts out under the tutelage of a professional dancer who thinks they're all idiots. I mean, how real is that?

"It pleased me to read on the back of the Peter Gunn LP that a "new young piano player" named Johnny Williams was involved in the recording. I have suspicions but cannot prove that he's the much respected best screen music composer of today."

The much respected screen music composer of today gets the credit - "The pianist who played the well known piano portion of the "Peter Gunn Theme" was future film composer John Williams."
- and I suppose the royalties - so he's likely the one.

I enjoyed this pot Uncle Jim. I agree with just about all of it. We don't even get TV at our house. We feel that it is not worth the money we would spend on it. And we would spend too much time watching TV when we could be doing better things as a family. I am a huge fan of the Dick Van Dyke show though. I get Netflix and am going to see if they have any of the episodes available to rent. And I LOVE MASH. I hated it when I was a kid. I remember sneaking just inside my parents room when I was very little(when I was supposed to be in bed). My parents would be sitting in bed, watching MASH and laughing like crazy. I would look at the TV and seen nothing but adults dressed in white, standing around a table and talking about nothing. And everything else was the ugliest color of green I had ever seen. I love it so much now though :).

I seem to recall you being a fan of a little show called "Buffy". It also had a great opening theme. Not to mention the "Grrr, arrg" at the end! Always loved that.
Anyway, Jane and I were thinking of doing a Buffy marathon on or around Halloween. Care to join us?

I have to agree with most of this post. TV for the most part has gone south! We don't have TV because even the commercials are innappropriate for the kids (and mom and dad.) I can't believe what is acceptable nowadays! What ever happened to shows like The Cosby Show. I too like Ugly Betty! I guess I can relate! TV is just one more thing that started out good and has been taken over by the master of all evil. We have to be very careful what we decide to watch. Thanks for getting me thinking!

Buffy? You liked Buffy? *chuckle* I had a platonic "thing" for Spikey for a while.....

I remember when Magnum blew that bridge up. I laughed too. The creator of Magnum also created NCIS as well as JAG and some other really good shows--in my opinion, of course!

In our home, we watch the original CSI, Flash Forward (although last week's was a little too worldly for me (ewwww), Cold Case, Smallville (although not sure how much longer there), and Ghost Whisperer. We've also started watching Three Rivers and The Mentalist.

After years of just CSI, Smallville, and Ghost Whisperer... Wow.