The Grand Duchess of my Small Collection 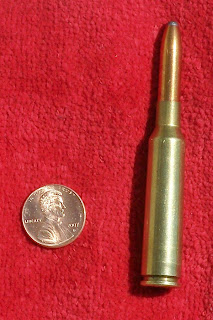 This lovely is a model of 1896 Swedish Mauser, a battle rifle which is more sought after today than it ever has been. This one was built in the year 1900 according to the stamp on top of the forward receiver ring. It has the sweet facility of being able to blow up milk jugs and even smaller targets without a telescopic sight and with varying weights of bullets at ranges well in excess of 100 yards. This makes aging shooters look pretty good to their companions, even when the shooters are only half as old as the rifle. It develops very little recoil, because it's .26 caliber bullets are relatively small and lighter than some of its contemporary antagonists might have fired. However, its standard weight bullet was just as heavy and a little heavier than what the Americans, the Germans, and several other nationalities were shooting for most of the twentieth century. This long, narrow projectile would start out from the muzzle at a relatively sedate 2,500 feet per second or so, but it would maintain its velocity better than lots of other bullets and would penetrate better when it arrived on target.

These Swedish Mausers, known affectionately as "Swedes" among collectors and shooting enthusiasts, are known for their fine fit and finish. I own two other rifles which cost more money than my Swede. One of them is a very fine Czech-built hunting rifle chambered for an exotic cartridge that has seen service against every large African and Indian beast including elephant. But, if I were forced to choose just one of my currently owned four rifles to keep and use for the rest of my life, I would probably choose this 108 year old, utterly reliable, deliciously accurate old Scandinavian Queen. And it would never disappoint me.

Obviously I have nothing to say about your gun. Don't know, don't care. But I LOVE the 'Today in History'. Florence has always been a favorite of mine. In fact she is a minor character in one of my favorite mystery series'. Keep it up, I'll love to check on that daily.

I agree with Jocie about Florence Nightingale. She was a truly great person. I saw a film years ago which starred Jaquelyn Smith as Florence.

The Crimean War in which she made a name for herself, was a pretty nasty thing. Technologies that would become famous during the American civil war were first tried out there, the Minie' Ball among them. And, of course, The Charge of the Light Brigade occured during that particular shootout between the Russians on one side and the French and British on the other. If you take a look at the Crimean Peninsula, you can see why everybody wanted to possess it so their fleets could possess that sea.