The Latest Snake Oils for Dementia 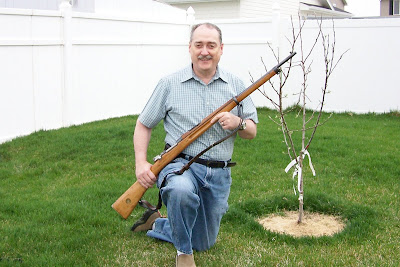 A 58 year old man with a 109 year old rifle. One of them still functions quite well.
For quite a few years I've suspected that something was wrong in my head. It's easy to joke about such things, but I really did think it. Most folks with whom I confided this concern tended to pooh-pooh it, whether out of genuine conviction or simple kindness, I never knew.

Recently, however, a diabetes specialist said flat out the thing I'd feared for many years. I am in the early stages of Alzheimer's Disease.

For many of my teaching years I used a weekly publication to play a current events game with my high school kids. There were pages of eight or ten questions each on several different subjects. There was a page on current politics, a page on History, a page on medicine and science, a page on the entertainment world, and, for no reason I could divine, a page on sports.

Early in my career I was leading a group of Senior Government students in this game. We were on the medical/scientific page. The answer to the next question was "Alzheimer's Disease." I read the question. No one seemed to know it. Then, all at once, a boy named Bob slapped his hand on his desk, rose half-way out of his chair, and triumphantly shouted "Old Timer's Disease!" I laughed till I cried and it took several minutes to get the game back under way.

At one time I could have told you his last name. But no more. Lots of things have been slipping away from me like that for years now. My mother is quite the opposite. She can remember the name of every person she's ever met and much of their genealogy. I've tried not to hold it against her, but it hurts to realize that your parent has a brain that is more supple and reliable than your own.

Dr. Vance assures us that everything we do to fight the diabetes is also fighting the Alzheimer's. This is mildly cheering, although it would have been so much more so had he simply said, "If you get your blood sugar down to such-and-such a level and your triglycerides down to so-and-so, you won't have to worry about Alzheimer's any more." I waited in vain yesterday for him to say that. Among the things I must now begin doing is 30 minutes of daily exercise. He smugly said into his transcription recorder that I have "butter for blood." As if that's a bad thing!

Self-administered B-12 shots, fish oil pills, and some other stuff that doesn't come to my diseased mind at the moment will round out my treatment. I've given myself shots before, so the former is no big deal. The fish oil pills, however, seem a bit - fishy.

Kind-hearted-Carla, one of Sheryl's cousins who lives in IF and who was widowed last year, has offered to do the nagging for me to see that I get the exercise I need. She has also offered the use of a reclining, stationary bicycle. At first it sounded pretty good, but I have doubts as to the advisability of my assuming a stationary and reclining position. I mean, isn't that part of what led to all these problems in the first place? And how good could it be for my health to have more than one woman nagging me?

There is something almost liberating about knowing that I have a disease which, sooner or later, is terminal. It might take years, but it's still a killer. It has made me feel that I can share with others (like Carla) a list of things that I've wanted to do for a long time and which I still want to do before I check out:

1) Take a big bear with a powerful rifle, either my 9.3x62mm or a .45-70. An American Buffalo would be a thrill to get, too.
2) Take a wild boar with a spear, just like our European ancestors used to do it; there are ranches in Texas where they'll let you do that - for the right price, of course.
3) Own, tame, and reload for a number of fine firearms which I once owned and had to sell in Boise, particularly a .223, a .45-70, several S&W revolvers, and a couple more Mauser battle rifles. While we're being greedy, why not throw in a .30'06 rifle and a 1911 .45 ACP Government Model pistol as well? Or, failing the latter, how about a 1917 Smith & Wesson chambered for the same cartridge? I had one once and was forced to sell it in Boise. I still have my custom-made holster for it with my initials on the flap. A good, solid .22 pistol, probably a Browning Buckmark, would round out my satisfied greed very nicely, I think.
4) I would dearly love to tour my mission cities again and take as much family as can be wedged into the airplane. Because of its expense, this is the most unrealistic dream of all. But I still dream of how wonderful it would be.

My awareness of the sweetness of life has been heightened by the presence of Dante here this week. He speaks way too fast and is a bit wild, but I've never met a more loving child. And his intelligence is nothing short of amazing! He looked up at my five-year-old self on the wall the other day and asked whether it was a picture of himself. A valid question. We seem to be a lot alike. There's comfort in that, too. I only wish all my children were so sure of their affection for me.

There's a three-hour meeting block tomorrow, and I'm pretty tired, so I'll apply a recent portrait of the demented old thing to the top of this little article and then head to bed. All the best to all of you.
Posted by Jim at 12:29 AM

I'm still having a hard time wrapping my mind around all of this. Especially when I see your writing skills. Are you just the highest functioning Alzheimer's patient ever? Can we vote on this?

Uncle Jim,
I am very sad to hear this news. However, the way you talk about it makes me feel better. You seem to have come to terms with it. I suppose that is the best attitude to have about anything. I certainly hope that this terminal illness that you have takes it's toll later rather than sooner. In the mean time, I want you to know that I love you very much, and am proud to have you as my Uncle. You will be in my prayers, and if there is anything else I can do for you, please let me know.

Maybe I'm just in denial here, but after reading your latest entry I have to wonder. Are you just the highest functioning Alzheimer's patient there is?

There is a snippet of a song lyric that keeps running through my mind lately. Perhaps it's the good Lord trying to tell me something and improve my attitude. I don't know which song it's from, as I can only remember the one short bit. "I'm gonna live, live, live until I die." I think that's all any of us can hope for. Whatever it takes, I'm gonna live, live, live ... And I'm gonna keep smiling while I do it!

What can any of us say? I hate this. Hate it. However, call it denial if you must, I still don't think it's going to get worse. I don't. I don't always remember names and faces as well as Gran either. What she has is an unusual gift, and we should not compare ourselves to her. Is your memory perfect, nope, but I do think that once you being exercising more regularly you're going to begin to feel better and more alert from day to day.

That's my 2 cents for what it's worth.

Oh, and I want to go to Italy with you, too!! If I had to pick one person to go anywhere with Dad, it would be with you to Italy.