The Wrath of Miss Sadie 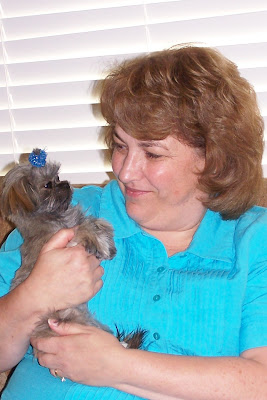 Sheryl's former USMC daughter, Hannah, and her devil-dog companion, Erik, drove to SLC today so that she could be looked after by VA physicians. Our duty was to pick up Lola, Erik's big baby Rottweiler, from day care. We did so.

At maybe 7 months of age, Lola is already a lumbering giant compared to the tiny canines which inhabit our humble domicile. She weighs 53 pounds and has a lot of growing to go yet. Her vigorous affection can knock a man down if he's not careful.

When we got her home, Mico, as he's done before, tried to avoid her. Sadie, however, failed to notice that the offending creature who had the audacity to enter her dwelling was 25 times her size. She tried repeatedly to engage Lola in vigorous play. She was ignored. When Erik and Hannah finally arrived about 9 pm, Lola decided to get playful. This made Sadie a bit nervous, and she ran for Sheryl's lap.

Lola did not recognize this as the sanctum sanctorum which it has always been for our dogs. She ambled straight at Sheryl's knees and received quite a shock. Miss Sadie charged her, not once but several times, fairly screaming her rage each time. Her growl was so high pitched that she sounded a lot like an angry cat rather than a dog. Lola, still thinking it was all in fun, kept returning to the forbidden area. And every time Sadie would charge her with abandon, seeming to be fed up with the audacity this interloper was showing. At first, we four humans only stared agape at this phenomenal behavior. When it showed no sign of stopping, we all began to laugh helplessly. Sadie was pushing her back 4 or 5 feet each time!

After the kids left, taking Lola with them, we retired to bed. The pups took up their accustomed places on the bed as we held our prayer. Sadie curled up into her furry ball self. In that condition, she's not much bigger than the average baseball. We had to laugh again when we realized anew that this tiny creature, weighing in at 2.3 pounds on her last visit to the vet, had unhesitatingly charged a 53 pound Rottweiler and lived to forget about it by bedtime. We are looking at her with newfound respect.
Posted by Jim at 12:24 AM

That is hilarious--I wish I could have been there to see and hear her performance. Would you say she's got the lungs to persue a career in opera? It sounds like she'd give Kathleen Battle a run for her $$. Just a thought... :)

one of those "where's a video camera when you need it" moments. Sounds like a fun evening.

It's all in the attitude.