Strangers in the Night - Or the Day for That Matter 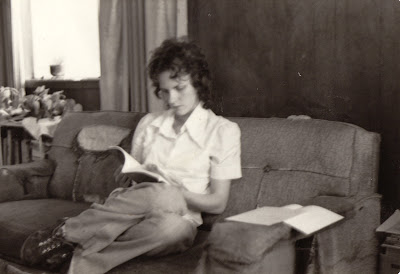 The One
Frank "Ol' Blue Eyes" Sinatra recorded a song in the sixties called Strangers in the Night.
Musically, it was pretty appealing, although his chant of "Scooby, dooby, doo" at the end quickly became a joke to my own generation. I think it was the inspiration for Scooby Doo cartoons, although I'm not certain.

A little more that 40 years ago, and much to my surprise and delight, I discovered that there were a few members of the most adored race on earth, girls and women, who found me attractive. No one could have been more surprised by this turn of events than myself. I was in the daily habit of examining my practically 6 foot frame and heavy glasses in the mirror, sighing, and sallying forth to meet the ridicule of my peers. I'm a slow learner about some things. By the time I learned to have confidence in the kind remarks of a few girls, I was in college and was surrounded by luscious girls as far as the eye could see. At that time, what with missionaries out and lots of guys n Vietnam, we of the male persuasion found ourselves pleasantly surrounded by a 3 to 1 majority of female students. This made it particularly difficult to study. Indeed, it made it particularly difficult to care about anything. Everything in Rexburg was within walking distance, and sometimes I'd have my father's 1964 Buick Wildcat which ran like a scalded dog. Now, I was always sincere about my affections for all the girls I was seeing. I really adored some of them. But there were so many of them, that it sometimes took two or three hours to kiss them all goodnight.

I quickly lost count of the number of Ricks College "co-eds" who would lead me into the apartment's living room, plant me on the couch, be gone for a few moments (apparently to ensure no interruptions from other girls in the house) and the run into the room and into my arms. As men grow older, we sometimes forget how wonderful it is to be kissed hungrily by a lovely girl. It had to be the purest pleasure I'd ever had up to that time. But I had to be the one to put the brakes on sometimes, because not all young women feel like putting the brakes on. Besides, I still had a couple of houses to hit before I got home. It quickly became a drug to which I was addicted for life.

So I had to chuckle the other day when I got an email with a little joke in it. It claimed that science had discovered a food that reduces a woman's sex drive by up to 90%. This dangerous potion is called "Wedding Cake." Well, it would be useless to deny it.

I've always been faithful to my wives, at least in the literal sense. But there were times in my youth when I got a bit carried away. I've tried and tried over the decades to repent completely of these things. My sorrow is genuine until I start to remember the lithe, lovely creature in my arms, clinging to me as if her life depended on it, her hair and breath and face becoming a separate world in which I escaped all cares and experienced a kind of companionship which seemed as perfect as any worldly experience.

Marriage made it much easier to stop dreaming about girls by the dozen. I could be faithful to one, because I adored her to the exclusion of all others. But this didn't mean that I didn't get nostalgic sometimes for all the freedom and adventure I'd experienced at Madison High, at Ricks, and at Monterey before I found "the one." The Lord saved me any number of times from dangerous situations into which I had place myself right willingly. But I still need to repent of the nostalgia. At nearly 59 it is difficult to regret having once held a brunette in your arms months after your mission who hastened to mention statistics to you such as 38" x 23" x35", especially when a quick glance would tend to verify everything she'd said with such pride and confidence on her face.
Posted by Jim at 11:10 PM

Labels: being cautious who you're with and when you're with them. Difficulty of repenting of something which still seems like a sweet memory or nostalgic., Being strangers in the night