Attack of the Puppy People 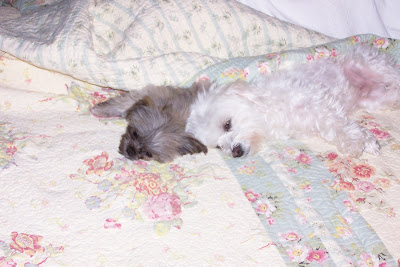 Our hearts were assaulted by one wonderful dog after another tonight. If you've ever watched the Westminster Kennel Club Dog Show, a thing which has been happening for well over a century, you know what a wonderful variety of wonderful breeds are to be seen and admired there.

We were very impressed by the big, black Giant Schnauzer, the casually elegant Scottish Deer Hound, and nearly every other dog, large or small, that came on the screen. We had missed about the first half of the show, but it was easy to catch up. We got into it 23 minutes before they brought out the "toy" breeds. Naturally, we were rooting for the Maltese which was as happy and elegant as the breed is always known to be. But both of us were charmed almost to pieces by a lumbering little thing with long ears, short legs, and a short, thick tail like a club or a sap. It was a Sussex Spaniel, and, despite ourselves, we couldn't help cheering him on, too.

To our joy, he won Best in Class. They then went on to all the noble and often huge "working breeds." Some of them, such as the Newfoundland, have been favorites of mine since the late fifties when my parents bought an encyclopaedia. (Sorry, I prefer the old fashioned spelling.) It was the 1959 World Book, and the D volume was out often in our house. I had memorized the names and appearances of many breeds long before my age was counted in double digits. The names and appearances of them stuck with me easily for many years. The first time I ever saw a live Bedlington Terrier, I knew it instantly.

We had lots of dogs growing up. There was a German Shepherd named Fraulein,, another named "Poochin' Pup," because we really couldn't think of a name, a lab mix name Char-lotte, because of her color, and my own dog, Heidi, who was a silky haired Dachshund with rumors flying around her about some questionable parentage and the possibility of a Springer Spaniel having insinuated its genes into her line somehow. I loved her, although she flunked out of obedience school in Idaho Falls and really could cause lots of trouble.

While we lived at 66 South, Second East in Rexburg, in the last half of the sixties and first few years of the seventies, a Siamese cat that we owned had a litter of kittens in a nest she'd made on a pile of boxed things in the back room. Heidi, sturdy and absolutely fearless, ignored my warnings not to satisfy her curiosity by climbing the pile of boxes to see what was up there. The cat's outrage and vicious attack did not even slow her down. Heidi dug in and began to fight her way uphill on the pile of boxes and junk. I watched, astonished, as she actually drove the mother cat off! She certainly had no intention of harming the kittens and largely ignored them after her curiosity was satisfied, if memory serves.

But Heidi had the morals of an alley cat and was soon pregnant herself. All her pups grew to be bigger and much less attractive than her. We had one of them for years, and I can't think of its name. Heidi eventually was given to a farm family. She was said to be quite happy out in the sticks. But soon we began to hear rumors of her not only joining but actually leading a sort of canine gang. She got an eye shot out, but she was undeterred in her life-long quest for adventure. I think she died from another gunshot. I can't recall for sure. Anyway, she was a delightful little creature, and I could hardly look at her without smiling.

The first time I ever saw my father cry was when I was about five. We had just gotten a sweet Collie pup in a time when Collies and Beagles were terrifically popular. There were lots of Boxers around Tennessee back then, too. Anyway, when he got home from the radio station (WAGG) and pulled into the driveway one afternoon, the little Collie ran out to meet him and was run over. It was the first time I'd ever seen anything die that was bigger that a small dime store turtle, and I was pretty sad about it, but I was also fascinated. The thing that really made it all so memorable to me, though, was seeing my father cry. Mama was trying to comfort him, crying all the while herself, I think. I just stood there and watched the adults and learned about what good people feel when bad things happen.

At the end of the show tonight, the little Sussex Spaniel - Stumpy by name - was declared Best in Show! We cheered an applauded on the couch. Our own dogs tried to ignore us; they were trying to get some sleep.
Posted by Jim at 10:54 PM

I just love dogs! I love to hear about family dogs. I mean dogs that family members have owned. I have bad a dog all of my life, until October of 07. I feel like something is missing in my life and that is a dog. And I am sure this will shock all of those who may read this, but I want a Pug dog soooooo bad!!!! I am still working on Kevin. He does not want one. But, If I am able to negotiate with him, I will need to come up with the perfect and coolest name for my Pug, so if anyone has suggestions. I would love some.

Seems my whole childhood I was reading that D volume of the world book. Must have learned that from you, but I don't remember. We, too, watched the Dog Show. Do it every year. Stump was our first choice when it came down to the final seven. For once our first choice actually came in first. seems like usually it's the poodle, how undignified can one dog be! Heidi, get a pug! They're adorable. Jane and I met a cutie one day, a puggle. He was the shape of a beagle but the coloring of a pug. Just precious.

If it's a boy dog you could call him Doug the Pug. I'll keep thinking. Love Mom